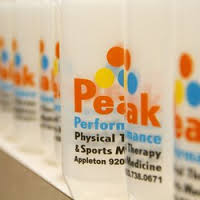 As we get into the peak of the summer hydration is an important thing on our minds. As temperatures climb exercising becomes harder as we lose more fluids through sweat.

During exercise, the normal person loses about 2-3 liters of sweat per hour. This leads to body mass losses of around 2-3%. Although this number isn’t that large, it can have huge effects on exercise performance. These numbers have been shown to fluctuate, however. Depending on an individual, their exercise program, metabolic rate, weather and even clothing, sweat rates and body mass loss can change greatly. The loss of water through sweat and improper re-hydration after exercise can ultimately lead to dehydration.

Dehydration refers to the loss of body water. Along with some more serious heat related conditions such as heat exhaustion and heat stroke, dehydration can cause muscular cramps and fatigue.  This is measured through core body temperature, heart rate and rating of perceived exertion. The greater the dehydration, the greater these physiological measurements will be. With increased stress, there has been observed impairments in performance especially in endurance athletes exercising for extended periods of time. According to one source, Cheuvront et al 2003, great reductions in body mass as a result of increased sweat loss (greater than 2-7%) have been shown to cause significant reductions in exercise performance, especially in hotter and more humid environments.

Staying hydrated, therefore, is a crucial way to help maintain and improve exercise performance. Prior to exercise, a person should adequately hydrate for 8-12 hours before their next exercise session. Drinking beverages containing salt (Gatorade), or eating salty snacks can even help stimulate thirst and the retention of fluids. Our past view of the traditional eight glasses of water a day has drastically changed. According to many sources, in order to be considered properly hydrated, you must consume about 1/5 to 1 ounce of water for each pound that you weigh. So, if someone weighs 120 lbs, they should consume roughly 60-120 oz. of water per day. That does sound like a huge range, doesn’t it? Well, the need for water will depend a lot of how active you are, where you live, your metabolic make-up and even the clothes that you wear. So if you’re an athlete who exercises in the hot and humid weather, you are likely to consume much more water than someone who is sedentary and lives in cooler climate.

After exercise, the primary goal is to replace any fluid that was lost during exercise. This replacement may be in sodium, potassium and electrolytes. An individual should consume roughly 1.5L or fluid of every kg lost during exercise. If an individual fails to properly hydrate after an exercise session, their performance could continue to deteriorate into the next day and next exercise session. Avoiding dehydration during exercise is key to avoid declining performance. If you find yourself exercising for prolonged periods or in hot climates, it is suggested that you consume a sports beverage. Compared to water, these beverages contain potassium, sodium and carbohydrates that will help to give you extra energy as you start to increase your sweat production.

Did you get that?:

-Everyone loses different amounts of sweat during exercise. Be aware of your environment & clothing as a way to stay cool and hydrated during your summer workouts

-Gatorade or other sports drinks containing electrolytes and sodium can be beneficial after exercise to quickly help restore what was lost through sweat.